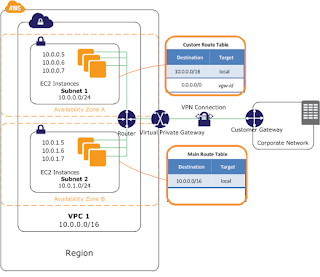 AWS users can connect to Amazon VPC through an Internet gateway, an on-premises data center through the Hardware Virtual Private Network (VPN) Connection tool or through a variety of AWS tools and other vendor VPCs.

Amazon VPC allows for more granular control of the cloud network, which provides an extra layer of security for workloads and data. A user can define network configurations such as IP address range as well as route tables and manage network gateways and subnets; subnets are smaller separate parts of the overall network. Amazon VPC enables a developer to create security groups to set limits on inbound and outbound traffic to Amazon Elastic Compute Cloud (EC2) instances and network access control lists to allow or deny traffic to subnets.

When creating an EC2 instance, users can assign an IP address to the instance, as long as it is within the IP address range of the associated subnet, not assigned to another interface and not reserved by Amazon. VPC routers enable communication between instances in different subnets. Routers also allow subnets, Internet gateways and virtual private gateways to communicate with each other. Internet gateways allow instances to communicate with EC2 resources that reside outside of a VPC and in other regions. AWS also offers several options to connect EC2 instances within a VPC to Amazon Simple Storage Service.

AWS provides a "Start VPC Wizard," which presents four basic network architecture options that dictate whether subnets are public or private and whether the user prefers to have access through the Hardware VPN. VPCs can span multiple Availability Zones (AZs), but subnets must reside within a single AZ. A user can also deploy Amazon CloudWatch and Auto Scaling within an Amazon VPC to monitor resources and allow them to meet spikes in workload demand.

When AWS users first provision EC2 resources, they are launched within a default VPC if the subnet ID is left unspecified. Default VPCs offer the same level of security and network control as regular Amazon VPCs, but they allow a user to create and manage resources using the AWS Management Console, EC2-Classic command line or API.

Amazon VPC provides organizations complete control over the virtual networking environment, including selection of your own IP address range, creation of subnets and configuration of route tables and network gateways.

There is a lot of buzz around in the market of webhosting, information technology and data storage these days. Many companies are using terms as virtual servers or VPS. Few of these companies call it as cloud server or virtual cloud. But what do they really mean by these technical mumbo-jumbo?

Are VPS and VPC i.e. Virtual Private cloud means same? Do they come with same pricing and same set of features?

I thought of throwing some light on the above so people will get more information on this topic.

Let’s first look at Virtual Private Server, also called as VPS. A VPS is the result of splitting one powerful physical server into many virtual servers. The benefits extended by this arrangement include easier management, dynamic resource tuning, and higher reliability than traditional dedicated servers. Actually VPS are also physical servers on bigger host server. One physical server includes number of small VPS. Data stored on these VPS servers is separate from other VPS. We can reboot or restart or terminate one VPS without affecting other VPS or main physical server. If Physical server fails then all VPS on the same server also fail. VPS does not offer high availability. If one VPS is affected by attack like DDOS then all other VPS will also get impact. VPS always share computing resources from physical server and other VPS. Hence RAM, bandwidth and CPU performance can be affected if another VPS on the shared server is demanding a higher load. We need to use only one Operation system by one VPS. There are always limitations like storage which depends on the main physical server which is not scalable.

Now we will look at the Cloud servers. Do this really have cutting edge over VPS? We also call it as Cloud Server or Virtual Private Cloud.

The Cloud Server represents the next evolution in data hosting. The cloud boasts self-healing capabilities, so that if a physical server fails, your virtual cloud moves to a spare. This ensures your server is always accessible. Once can instantly scale Cloud instance up or down to handle periods of increased load. Cloud server further enhances disk performance with Solid State Disk (SSD) accelerated storage. We have more advantages with Virtual Private Cloud as listed below
Click Below  to Continue Reading About Amazon Virtual Private Cloud (Amazon VPC) :

Call Berlisensi today and ask one of our highly skilled consultants to help address your organization's Cloud Services goals. Services become customer mandatory needs. Most companies is going to concentrate in their basic core business, IT is remain as an electronic tools to improve every single business. In order to bridge this gap, Berlisensi Berkah Mandiri provides solution for services either for SMB up to large enterprise companies. The solution start from project implementation and maintenance up to turn-key solution. In line with the rising demands of customer support availability we provide services for our valued customer with a full at :

For any inquiries or questions regarding our Products and Solutions, Please Contact Us :

Cisco Systems, Inc. is an American multinational technology company headquartered in San Jose, California, that designs, manufactures and sells networking equipment. It is considered to be the biggest networking company in the world. Cisco Systems was founded in December 1984 by Leonard Bosack, who was in charge of the Stanford University computer science department's computers.

The HP was an American multinational technology company headquartered in Palo Alto, California. It developed and provided a wide variety of hardware, software and services. On November 1, 2015 Hewlett-Packard announced plans to split the PC and printers business from its enterprise products and services business. The resulted in two publicly traded companies: HP Inc. and Hewlett Packard Enterprise.

At CommScope, service is a foundational pillar and continues to be one of our key performance indicators. From Wireless Installation Services to recycling CommScope cable reels after the work is done, we have a unique set of services that are geared to specific customer and network requirements.

Scale an end-to-end system of network devices across multiple locations within one unified interface. UniFi®AP, UniFi Video and mFi®are highly scalable, feature-rich hardware and software platforms that deliver enterprise performance at a fraction of the cost, allowing you to expand your enterprise network with hundreds of indoor/outdoor devices across multiple locations.

The Belden brand means reliability, for more than 100 years. In the 20th century, that trust was built on high-performance wire and cable products. Today, Belden designs, manufactures and sells a comprehensive portfolio of cable, connectivity and networking products for the transmission of signals for data, sound and video applications.

Panduit was born from innovation. In 1955 we launched our first product, Panduct Wiring Duct, a new invention that uniquely organized control panel wiring and allowed new wires to be added quickly and neatly. Since that time Panduit has introduced thousands of problem solving new products and remained committed to providing innovative electrical and network infrastructure solutions.

MikroTik now provides hardware and software for Internet connectivity around the world. Our experience in using industry standard PC hardware and complete routing systems allowed us in 1997 to create the RouterOS software system that provides extensive stability, controls, and flexibility for all kinds of data interfaces and routing.

Google is an American multinational technology company specializing in Internet-related services and products that include online advertising technologies, search, cloud computing, and software. Most of its profits are derived from AdWords, an online advertising service that places advertising near the list of search results.

NETVIEL Fiber Optic and Copper cable including all of the supporting accessories are manufactured and designed carefully by the expert. We are committed to keep on supporting and supplies the needs of Fiber Optic, copper cable and accessories by keeping the best quality and acceptable price to the market.

Samsung is a South Korean multinational conglomerate company headquartered in Samsung Town, Seoul. It comprises numerous subsidiaries and affiliated businesses, most of them united under the Samsung brand, and is the largest South Korean chaebol (business conglomerate).

Innorix products transfer these files most speedily without any limitation in the size of files, distance or network conditions. We are marking the highest market growth rate record in the global file transfer market every year.

For any inquiries or questions regarding our Products, Services and Solutions, please contact PT. Berlisensi Berkah Mandiri. Giving approriate services is our business.
Email : info@berlisensi.com